A Guide to Reflective Glass Film

​For many homeowners, balancing comfort and savings is a challenge. Improving the comfort of your home and minimizing your utility costs, reflective window coatings are able to help reduce heat gain and glare from the sun.
Windows
Window Glass
Reflective Glass Film
We find the company that suits to your needs
Make an inquiry

Often, homes with many west, east, or south-facing windows are subject to the "greenhouse effect," where sunny bright rooms quickly turn into unbearably hot greenhouses. Reflective glass films are simple, cheap, and cost-efficient additions for all styles of glass and windows—including double and triple-pane—and can quickly pay for themselves. Read on to learn more about reflective glass film and what to look for while shopping for these window coatings.

What is Reflective Glass Film?

Like insulating window coatings, glare reducing static-cling glass films are made to also block 99% of UV rays. This type of film is also removable and reusable. Although they allow infrared light to pass and consequently allow for more heat gain, glare reducing films can still be used to minimize television and computer screen washout. This means that you will be able to easily work on computers or other electronic devices in a light-filled room. 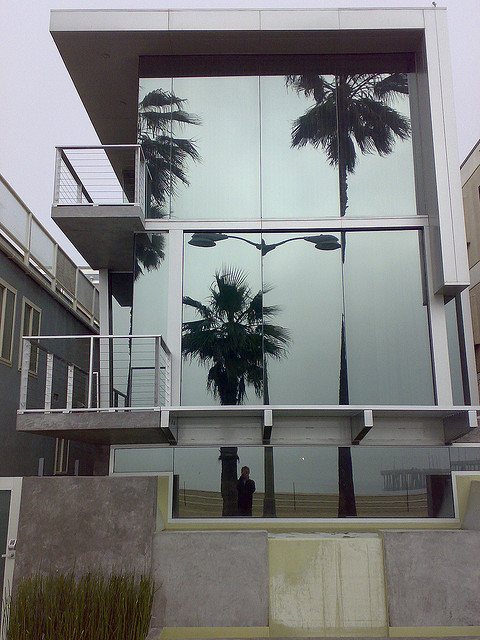 Reflective glass film is a great choice for a home with many west, east, or south-facing windows. | © CC BY 2.0 flickr.com / Jon Rawlinson

When shopping for reflective glass film for your windows, there are several critical terms and values to know. For instance, a film's total solar energy rejection (TSER) measures the film’s ability to keep infrared heat, UV rays, and visible light from entering your home's interior. The higher the number, the more effective the film.

A glass film's visible light transmission (VLT) measures the lightness of the film. This number will be lower with darker coatings. In finding a reflective glass film with a VLT around 50%, homeowners can potentially give their home an equal ratio of visibility and glare.

Finally, the film's UV radiation rejection will reflect how well your home is protected from the sun's ultraviolet light. The film's shading coefficient gives homeowners an idea of the overall heat reduction after adding reflective glass film to their windows. Generally speaking, reflective glass film with a shading coefficient of .5 or lower is recommended for the home.

Summer and its warmer weather can make it challenging to keep your home cool and comfortable. Fortunately, with the help of reflective glass film for your windows, you can reduce energy bills and maintain your home's privacy. Reflective glass film is a cheap and simple to fix common problems with windows today.

We find the company that suits to your needs
Make an inquiry
Written by: Ryan Mchugh, Editor www.HomeAdvancement.com
Read more articles
912.312 Referred
Homeowners