The Best Windows for Southwest Living

The Southwestern United States is known for its beautiful deserts, bright light, and at times unrelenting heat. The temperatures in this region can also fluctuate, leading to cooler nights and winters. Consequently, your Southwest windows should be able to insulate and to prevent most solar heat gain in order to keep your home comfortable in this climate.
Windows
Best Windows for your Region
Windows for the Southwest
We find the company that suits to your needs
Make an inquiry

The housing boom in the late 20th century left homebuilders across the country rushing into a soon-to-peak market with the hope of striking it rich. However, it didn't take long for reports of shoddy construction to emerge, including problems with cheap and poorly installed windows. Low quality, single-pane windows can be commonly found in new homes throughout the Southwest.

These windows offer only minimal protection from the sun's heat, and Southwestern homeowners should consider replacing any single pane windows in their home. The best Southwest windows should have excellent heat resistance to protect against the intense sunlight. Read on for more information about Southwest windows.

Because the Southwest's climate experiences much less moisture than many other areas of the country, homeowners may want to consider the classic wood window. In this region's climate, wooden windows are usually safe from rotting or warping due to moisture and extreme changes in temperature. Vinyl window frames is also an excellent option, as this material is lightweight and affordable. 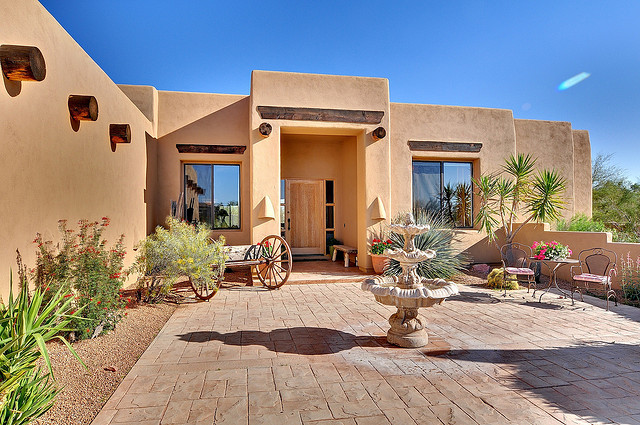 Southwest windows should protect your home against the intense heat and light. | © CC BY 2.0 flickr.com / Ben Freedman

Mesh window screens can help diffuse solar radiation, further keeping your rooms cool in the summer. These are particularly effective on east an west-facing windows.

Additionally, homeowners might want to consider exterior roof overhangs or awnings to shade south-facing windows. In the summer, exterior awnings or overhangs can help keep your rooms shadier and protect your furniture from the intense Southwestern light. These overhangs will still allow sunlight into your home, which is especially helpful in the winter when your home will need this extra warmth.

Spectrally selective and other low-emissivity glass coatings are able to allow visible light to pass through glass while blocking the damaging UV light waves and heat. These coatings help to make the most of the sun's beautiful natural light without having to sacrifice energy efficiency. Homeowners should look for windows with a solar heat gain coefficient (SHGC) below 0.3, an insulation value (U-Value) around 0.30 or lower.

Reflective window film is also a good choice for Southwest windows. This is one of the most effective methods for blocking solar heat and works best on east and west-facing windows. Since this film is permanent, it is not recommended on south-facing windows, as it will prevent passive solar heat gain in the winter.

Summary: Southwest Windows to Protect Against Bright Light and Heat

Beside their impact on your beach house décor and energy consumption, windows can also run as much as several hundred dollars apiece, making them among the most expensive of investments for your home. By combining energy efficient additions with cost-effective frame materials or classic wood alike, you can find a balance between beauty and efficiency for your windows in the Southwest.

We find the company that suits to your needs
Make an inquiry
Written by: Ryan Mchugh, Editor www.HomeAdvancement.com
Read more articles
912.308 Referred
Homeowners